Photos from the Big Gay Out

The Big Gay Out was almost a month ago. Now the photoshoots for my upcoming book are all but done, finally I can give an account of the day and a few of the photos I took…

We arrived bright and early at Coyle Park to set up the stall. Bex and I were a bag of nerves but VERY excitable. Setting up was not without it’s problems, despite a trial run in my best friends garden the day before we managed to forget a couple of essentials and whilst putting up our gazebo it broke. Luckily we had some cable ties and could fix everything together with those and the help of a lovely lady on the stall next to us.

I have never been one for video recording but I managed to borrow a GoPro for the weekend as I wanted to try a timelapse of the day. The battery life isn’t too good and we only managed to get us setting up, I think it’s worth posting just for fun. So here goes… my first attempt at video (kind of!) 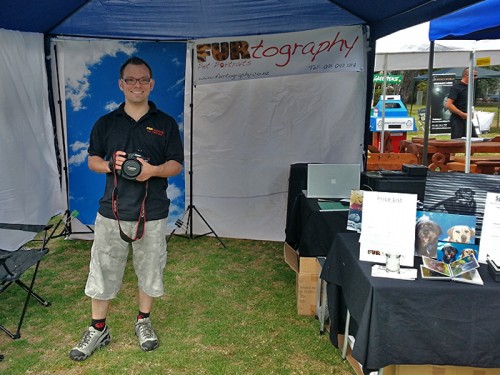 The day itself went well despite the heat being against us, I don’t think I’ve ever been so hot and I could see Bex melting, even in the shade! Most dogs were hiding in shady areas with their owners, but we had plenty of water and treats on hand for those passing by. It was awesome to talk to so many animal lovers and meet many Auckland dogs, including Lockie, an 8 week old Yorkshire Terrier, mobility dog Bentley and a gorgeous 3 legged corgi called Hoppi!

The images from the day are now in the client galleries and anyone wanting additional prints etc can contact me via this with any special requests. Those who attended and were interested in a FURtography photo session, I’ll be contacting you over the weekend, but my Auckland dates look likely to be 27th & 28th April, with limited spots each day so pencil those dates in your diaries!